This is a fast and simple test to determine cutting agents in cocaine.

Why Is This Test Important?

Dealers usually cut cocaine to increase their profit margins. The substances used for cutting are sometimes harmless, but it often happens that dangerous substances are added.

This kit tests for the most common and dangerous cutting agents including:

Uncut cocaine does not react with this test!

Simply compare the test result with the color chart included with the kit to find out if your cocaine is adulterated.

The testing liquid in the ampoule is a golden yellow color. Mix your sample for about 10 seconds and the compare the reaction color to the chart. Full instructions come with the kit.

What is Levamisole and Why is it Bad?

Levamisole is a drug typically used to deworm livestock, but in humans it can trigger a devastating immune-system crash called agranulocytosis. In other words, levamisole can destroy your white blood cells, leaving you susceptible to infections.

How Common is Levamisole Cut Cocaine?

There was a time when levamisole was rarely found in cocaine (1.9% of the time in 2005), but by July 2009, the DEA reported that about 70% of cocaine entering the United States contained levamisole.1 Cocaine cut with levamisole has been reported to have risen to 82% of tested samples by 2011.2

What About Testing Cocaine Purity?

This test doesn’t give a indication of the purity of your cocaine. For that, we recommend the Cocaine Purity Test Kit.

The Mystery of the Tainted Cocaine

I really like this test kit,for the reason I can see what is in the substances I am receiving. Which is definitely necessary if one intends to consume the suspected substance. Stay safe everyone and do your research! Thank you to TestKitPlus for making tests such as this one so readily available to anyone with discreetness. One love 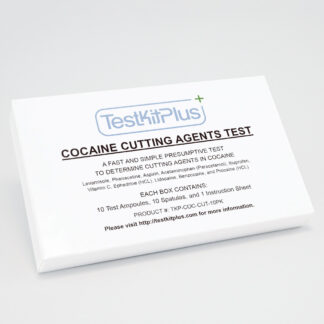